Aeroblazer was the visual component to my MFA thesis. A thesis at SCAD has two components, A written thesis paper, and a visual component that demonstrates the concept or argument of the thesis. My thesis was titled Gameplay Driven Content Generation, and it can be read in its entirety here.

My goal with Aeroblazer was to create a system in which levels are created dynamically while the game is being played. These levels are created in response to player actions, so that the created level becomes the result of how the the user plays the game.

Aeroblazer is a turn based game involving a vehicle that can both fly like a plane, and hover along the ground like a hovercraft.  In it, two players compete by alternatively flying and driving, creating a track while they do so.  Each turn consists of two phases: the driving phase, where the active player must drive the length of the track and make it to the end, and the flying phase, where the player adds to the track by flying a plane around, avoiding obstacles, collecting powerups, and trying to create a tricky section of track for the other player.

Each turn lasts for a limited amount of time as indicated by a meter in the center of the screen.  Within this time limit, the active player must make it to the end of the track in order to add onto it.  If the player fails to reach the track’s end before the meter runs out, he or she will not be able to add onto the track, and it becomes the next player’s turn.

Since there is no track when the match begins, the driving phase is skipped on the first turn, meaning the first player starts off by flying around the environment.

The match continues on in this manor until one of the two winning conditions is met.

Where v is equal to the total number of verticies in the track.

This equation ensures that as the track gets longer, the player is given more time to both navigate the track and to add onto it.

The other way for a match to end is by collecting all five checkpoints.  These checkpoints appear one at a time, and are randomly placed throughout the creation space.  Once a player passes through a checkpoint, he is given a point and the next checkpoint appears. 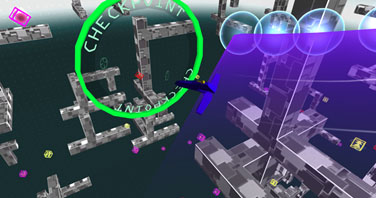 There are three powerups, and each one has two different effects.  These effects depend on if the powerups are used during the driving or flying phase of a player’s turn.

Purple powerups give the user a shield that protects him or her from losing health from hitting the side bumpers if used during the driving phase, or creates a section of track where the bumpers take away more health if used during the flying phase.

Aeroblazer is currently in an alpha state.  It is playable and the core experience has been refined and balanced to an extent, though I am still developing the game, and there are a lot of features I am still implementing or improving.  Some of these are described in my thesis paper.