In an effort to continue to refine my level design skills, I started work on a level mod for The Elder Scrolls 5: Skyrim.  I was looking for a project to work on that would allow me to build a polished level in a reasonable amount of time without having to build core mechanics and create assets.  This project allowed be to work with mechanics and player agency already built into the game, and utilize a library of modular assets.  The ability to purely focus on encounters and level flow, as well as the fact that really enjoy Skyrim, made this project very enjoyable to work on, and I was able to take the level from concept to completion in just a few short weeks.

I kept a detailed document describing all the encounters and puzzles, as well as my process and challenging parts of development.  If you’re interested in a more detailed breakdown than what I’ve provided below, take a look at the linked document below, otherwise stay on this page if you just want the short version.

Vylkinmar is a level mod that takes the player through a Nordic styled dungeon that features several unique elements not found in other dungeons in Skyrimk, including an inventory based puzzle to gain entry, an vertical dungeon entrance, and a boat ride with enemies firing arrows and spells at the player.

Gaining Entrance to the Tomb 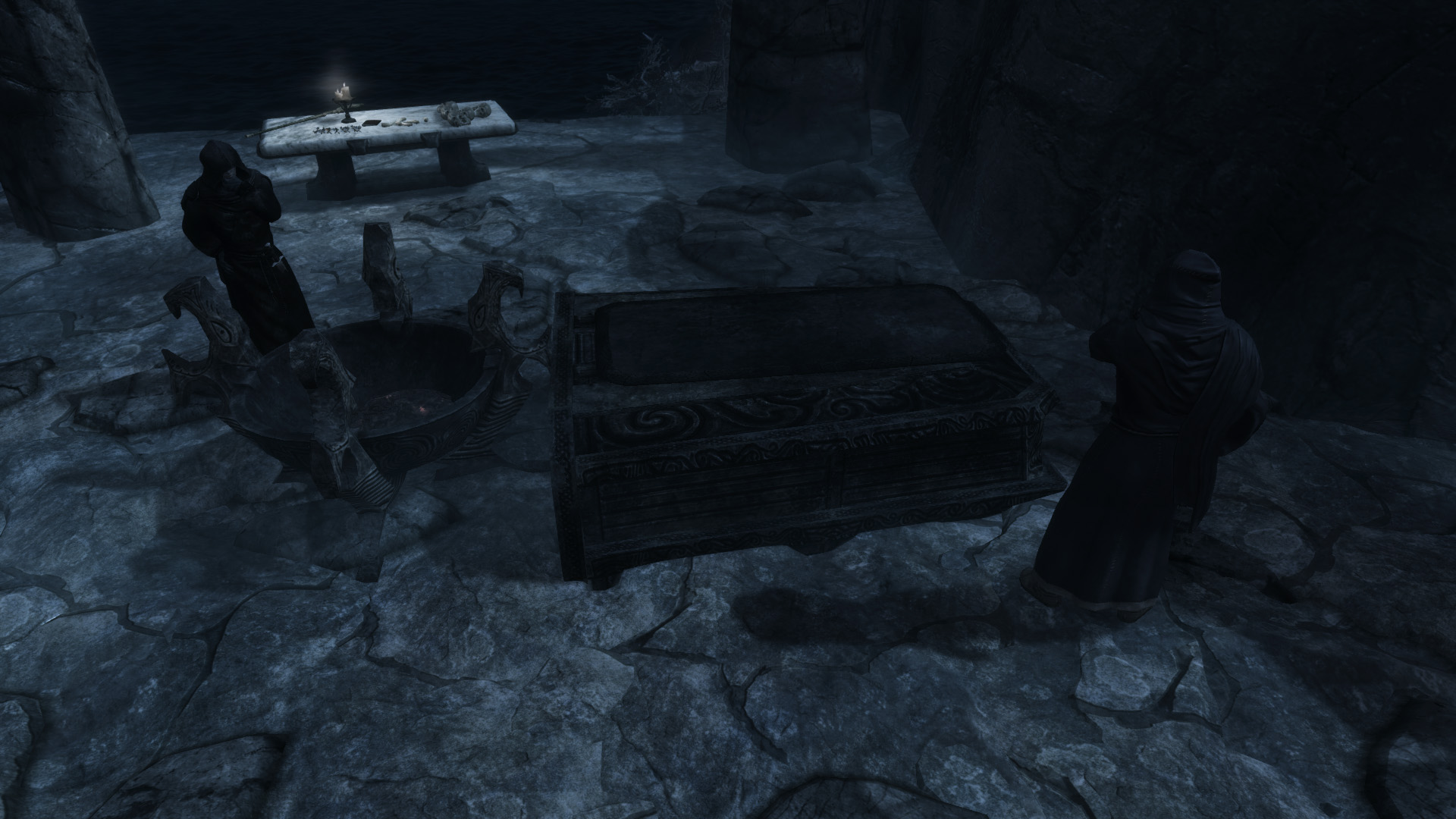 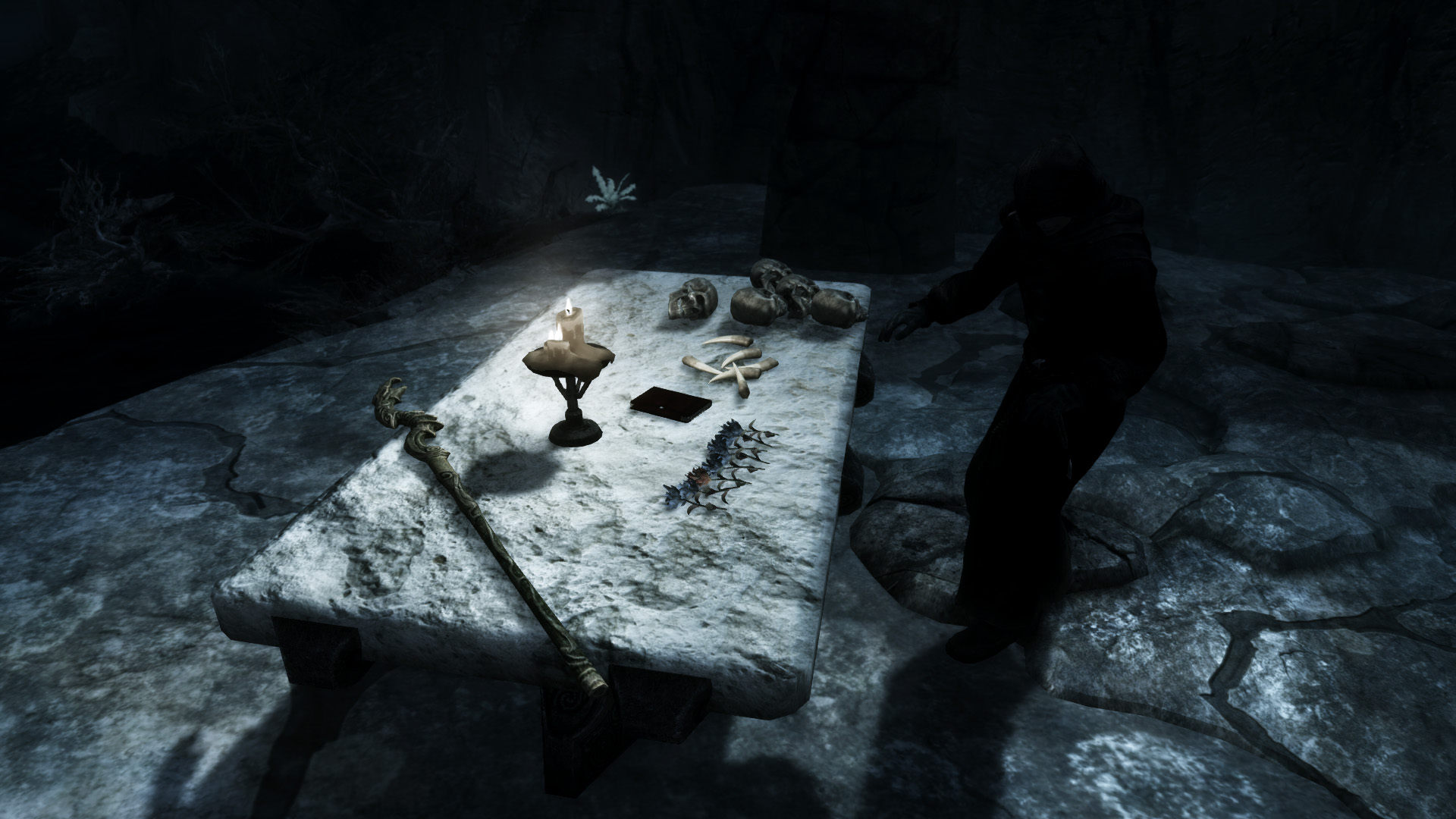 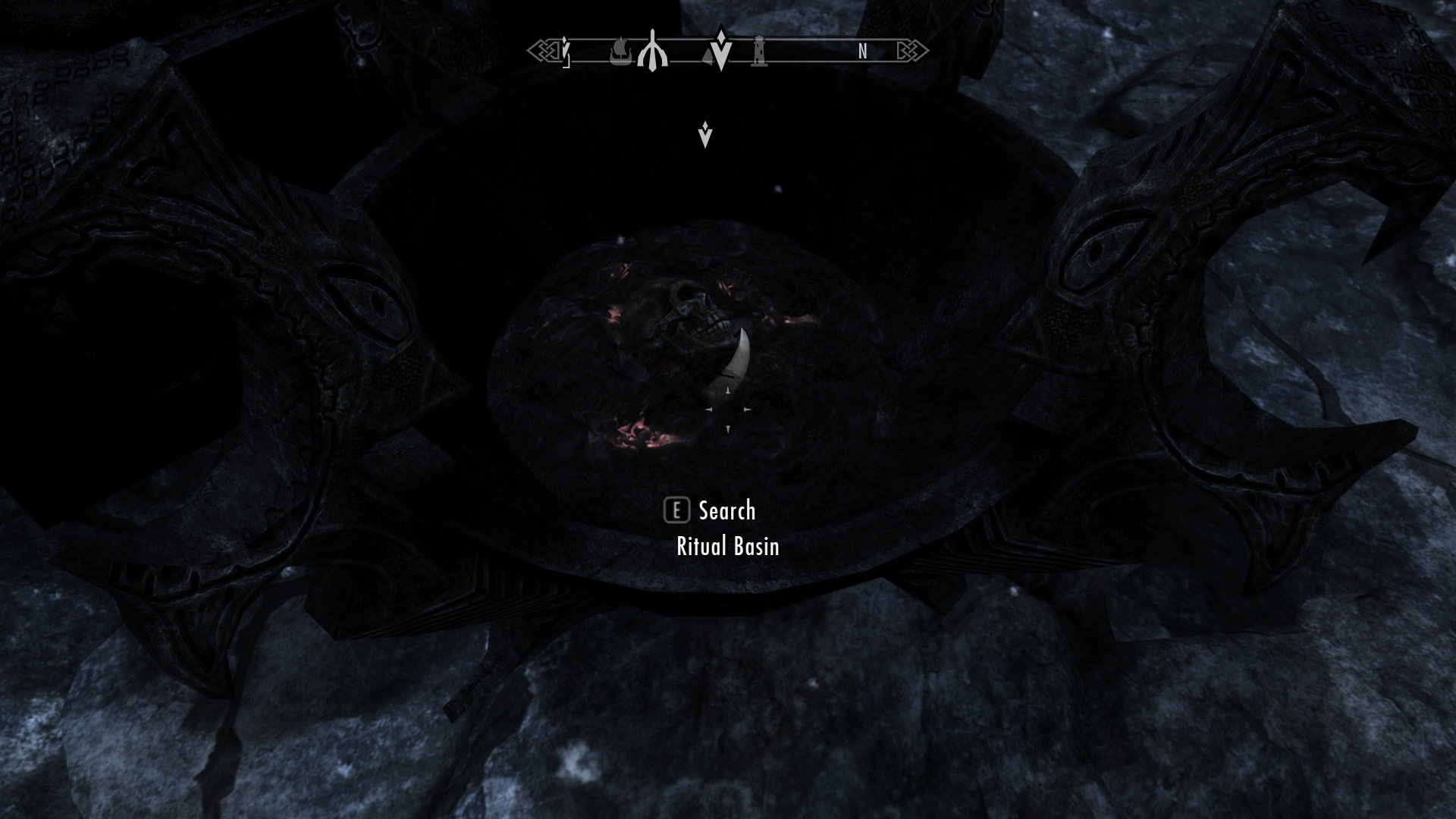 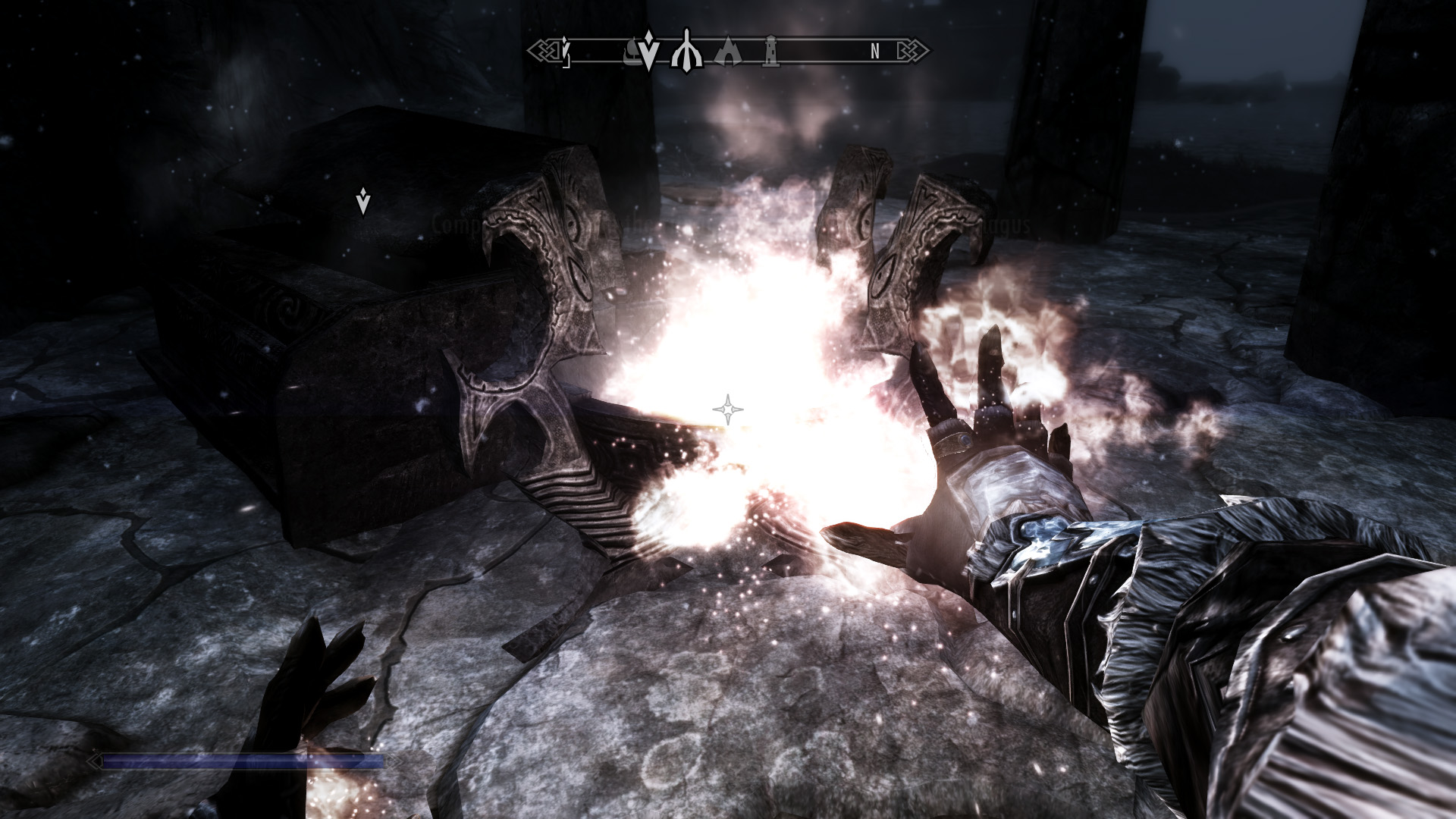 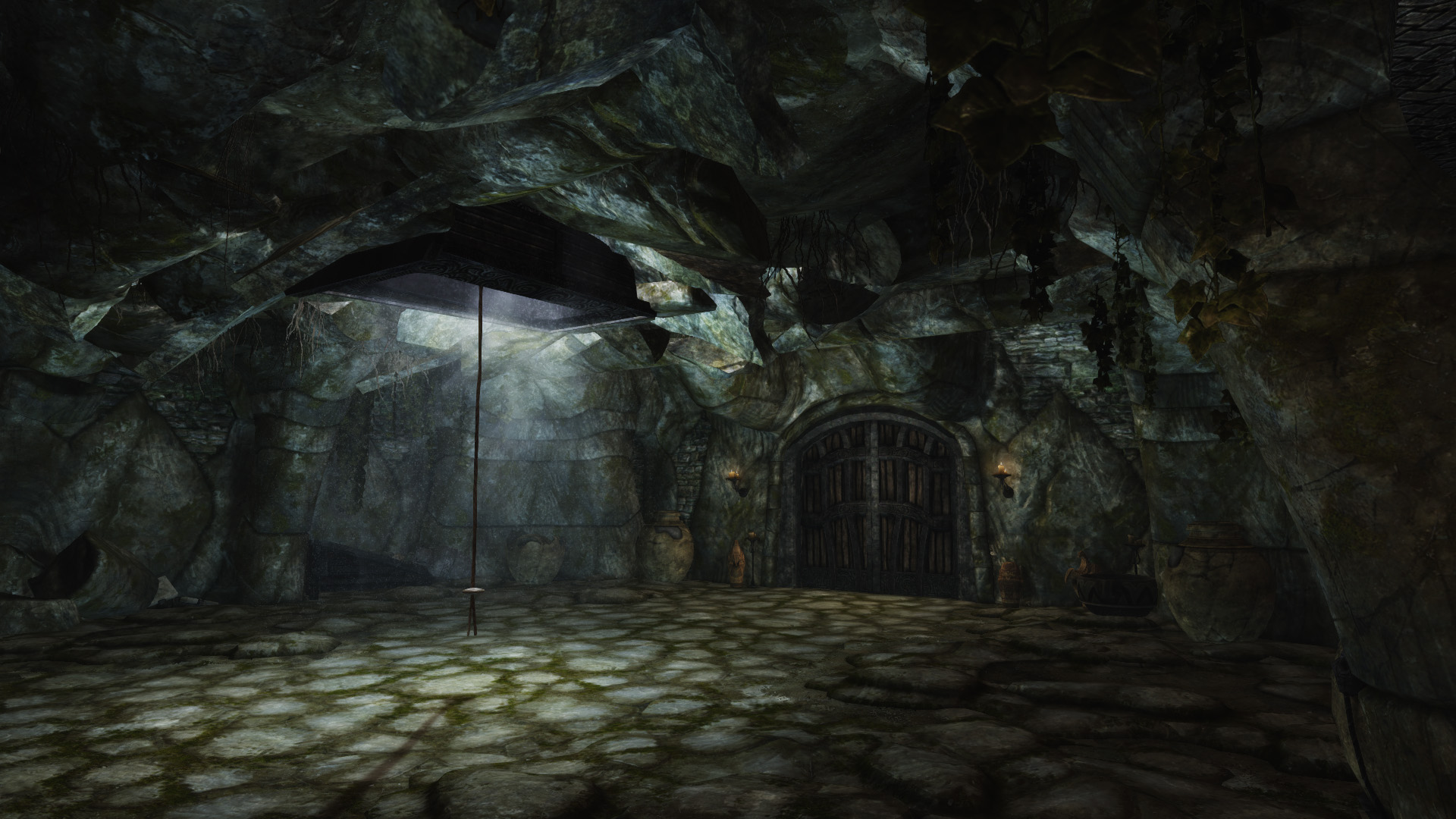 To enter the tomb, the player must complete a ritual involving placing the correct 3 items in a basin and using a spell or staff to light the basin on fire.  The player is clued in on how to complete this ritual by a journal he or she picks up after defeating a pair of necromancers.  Completing the ritual successfully opens the sarcophagus that serves as the entrance to Vylkinmar’s Tomb. 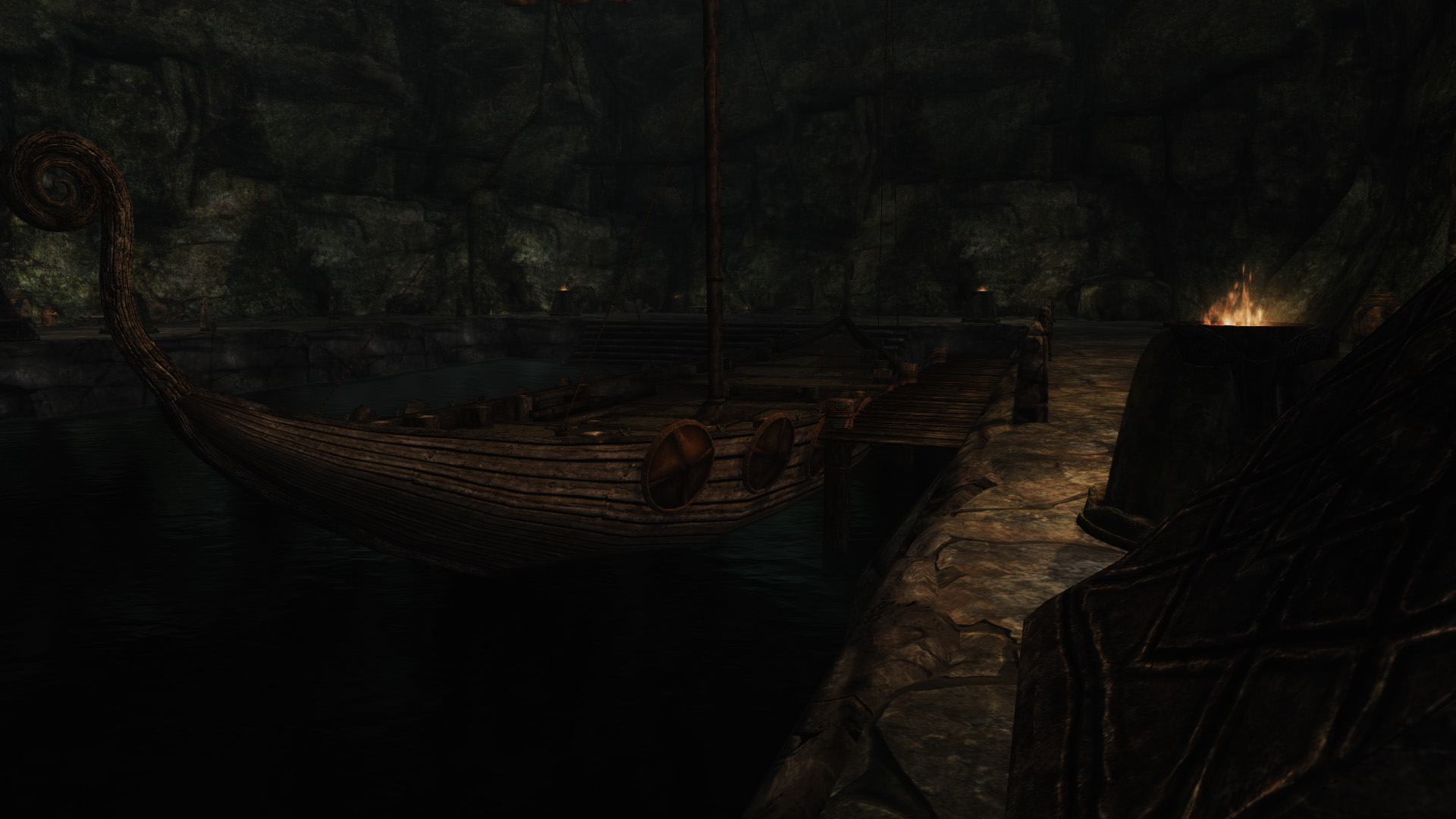 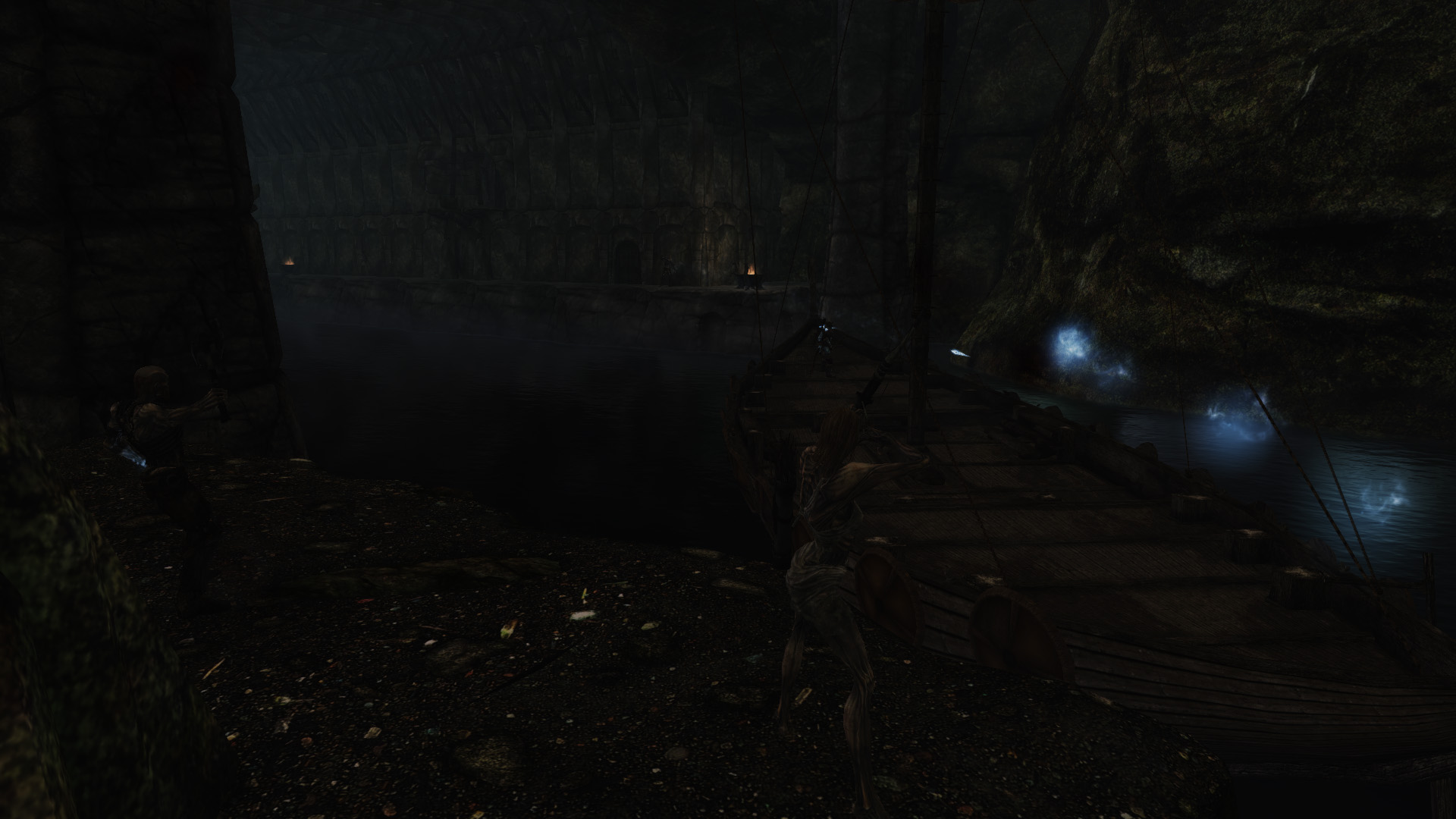 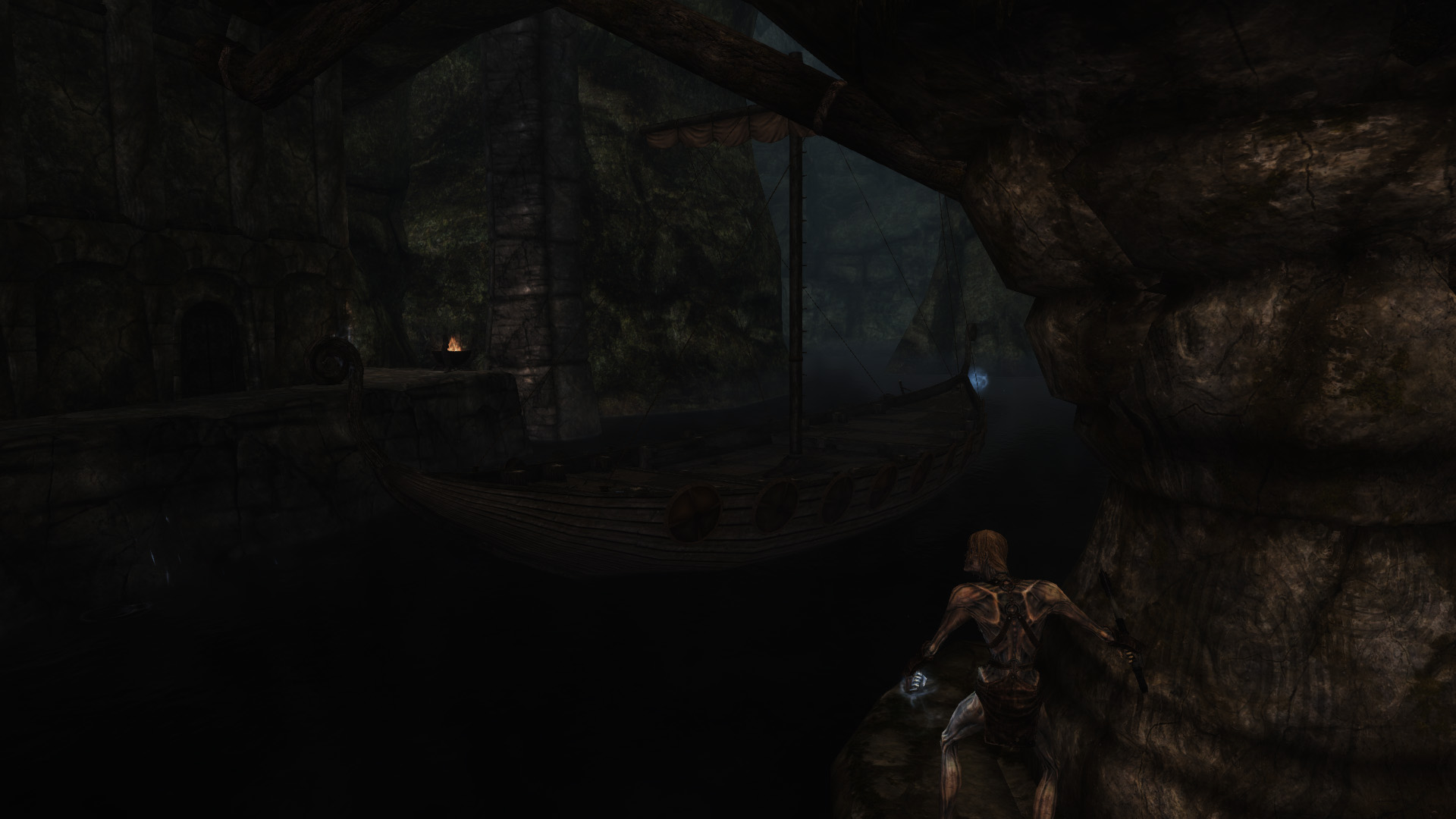 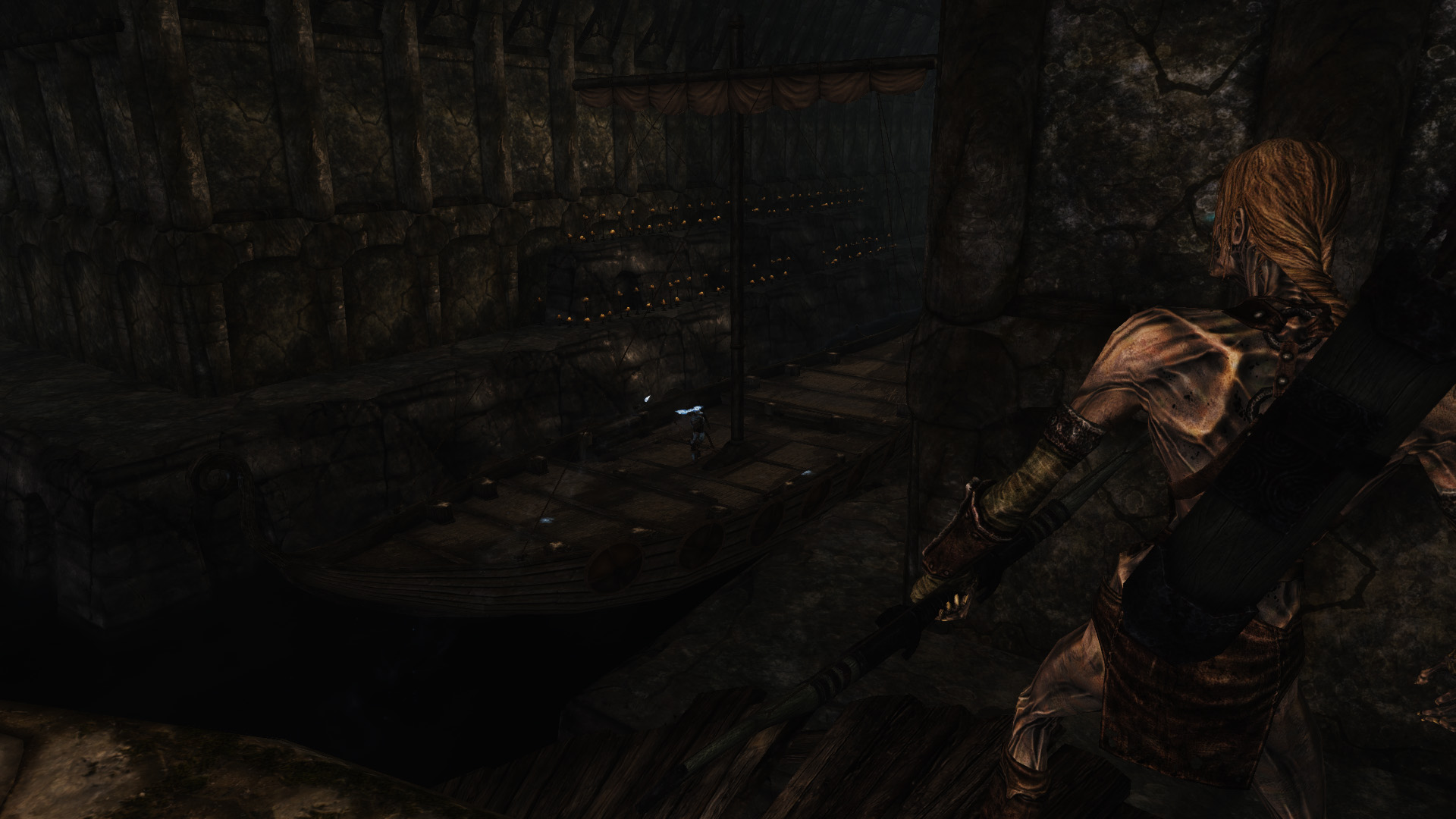 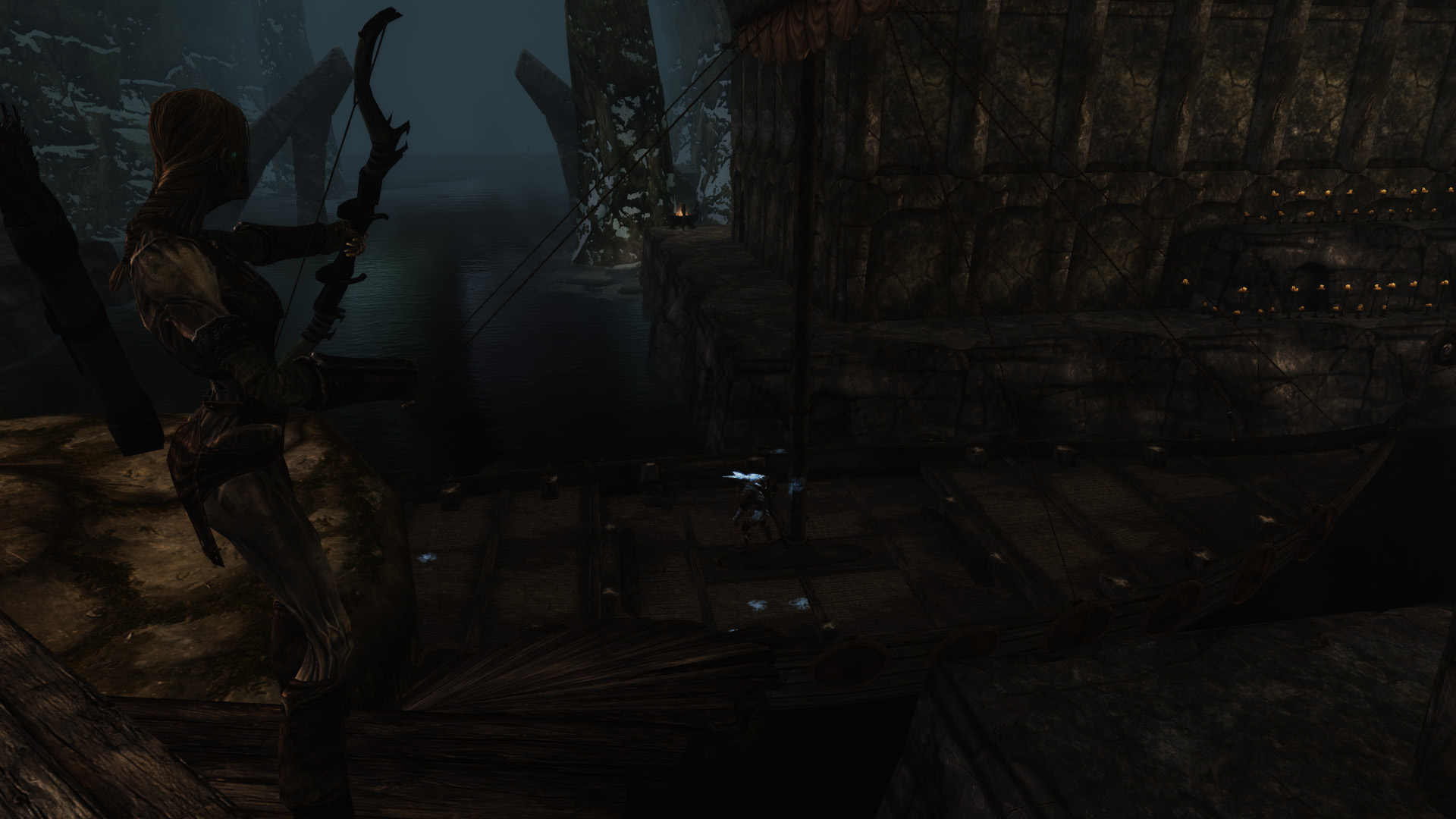 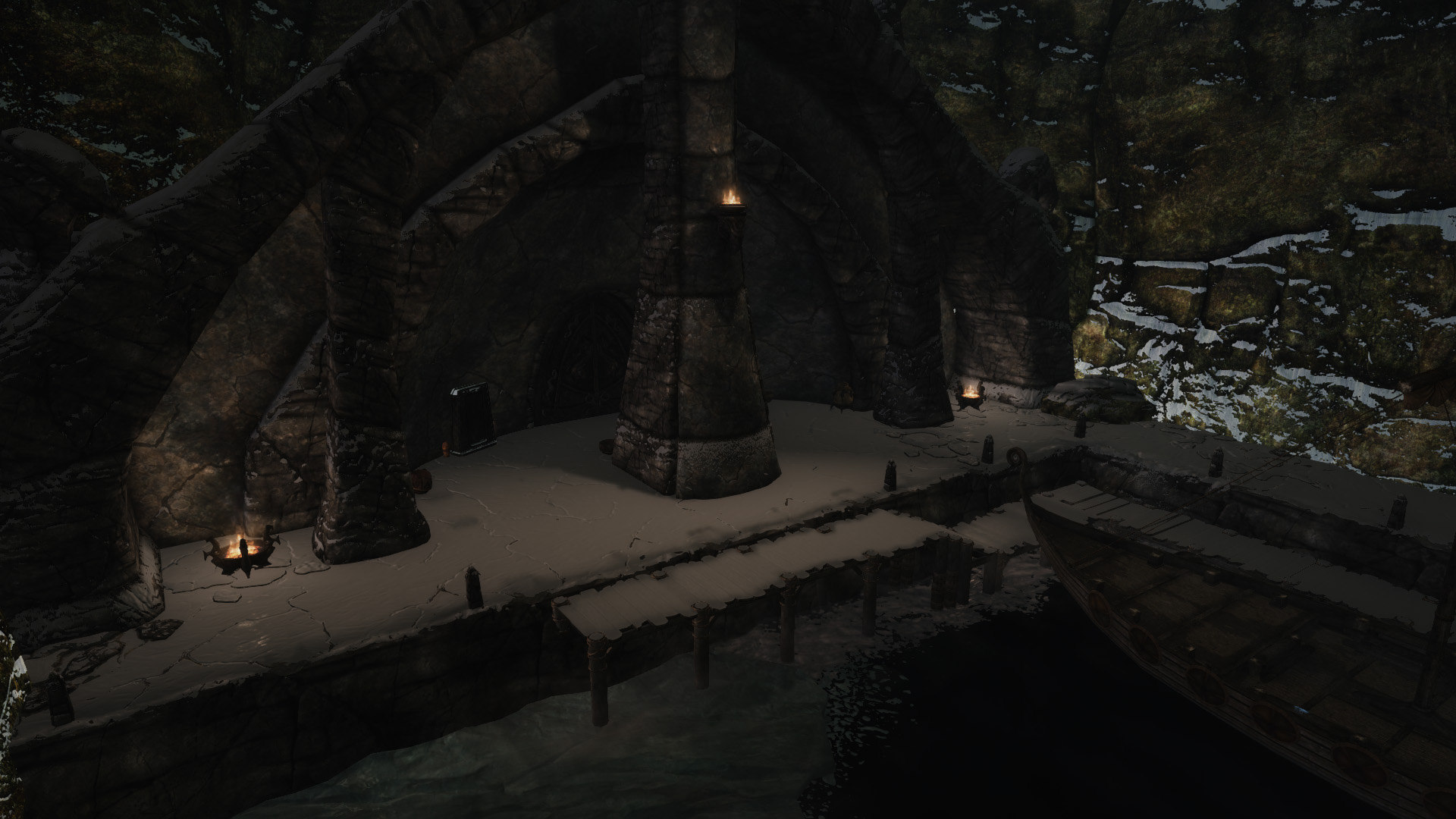 After reaching the second part of the tomb, players embark on subterranean boat ride inside of a massive cavern beneath the ocean.  While on the boat, players are fired upon by ranged draugr using spells and arrows.  Players can fight back with their own spells, arrows or shouts, or can do their best to avoid the incoming attacks. 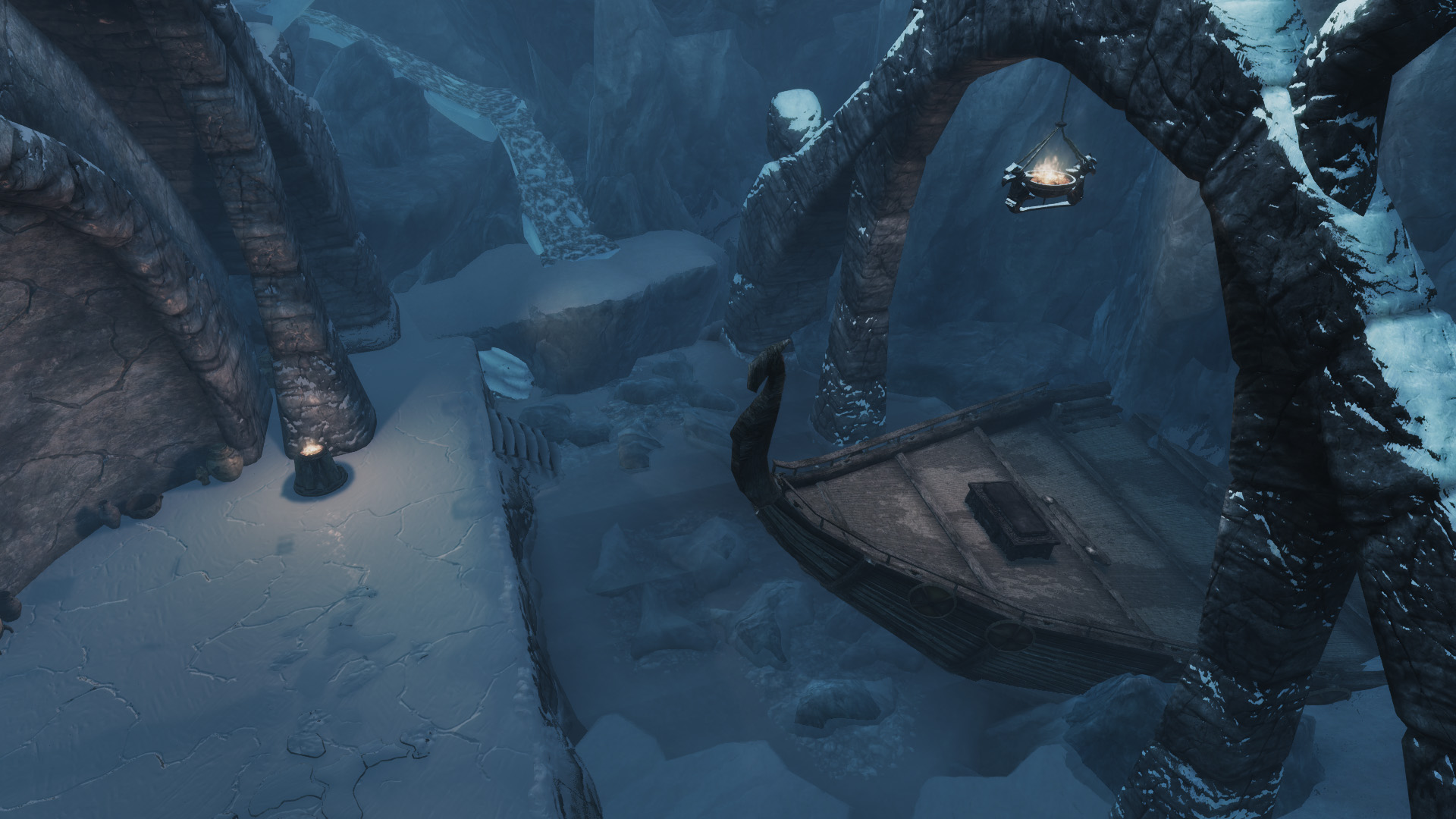 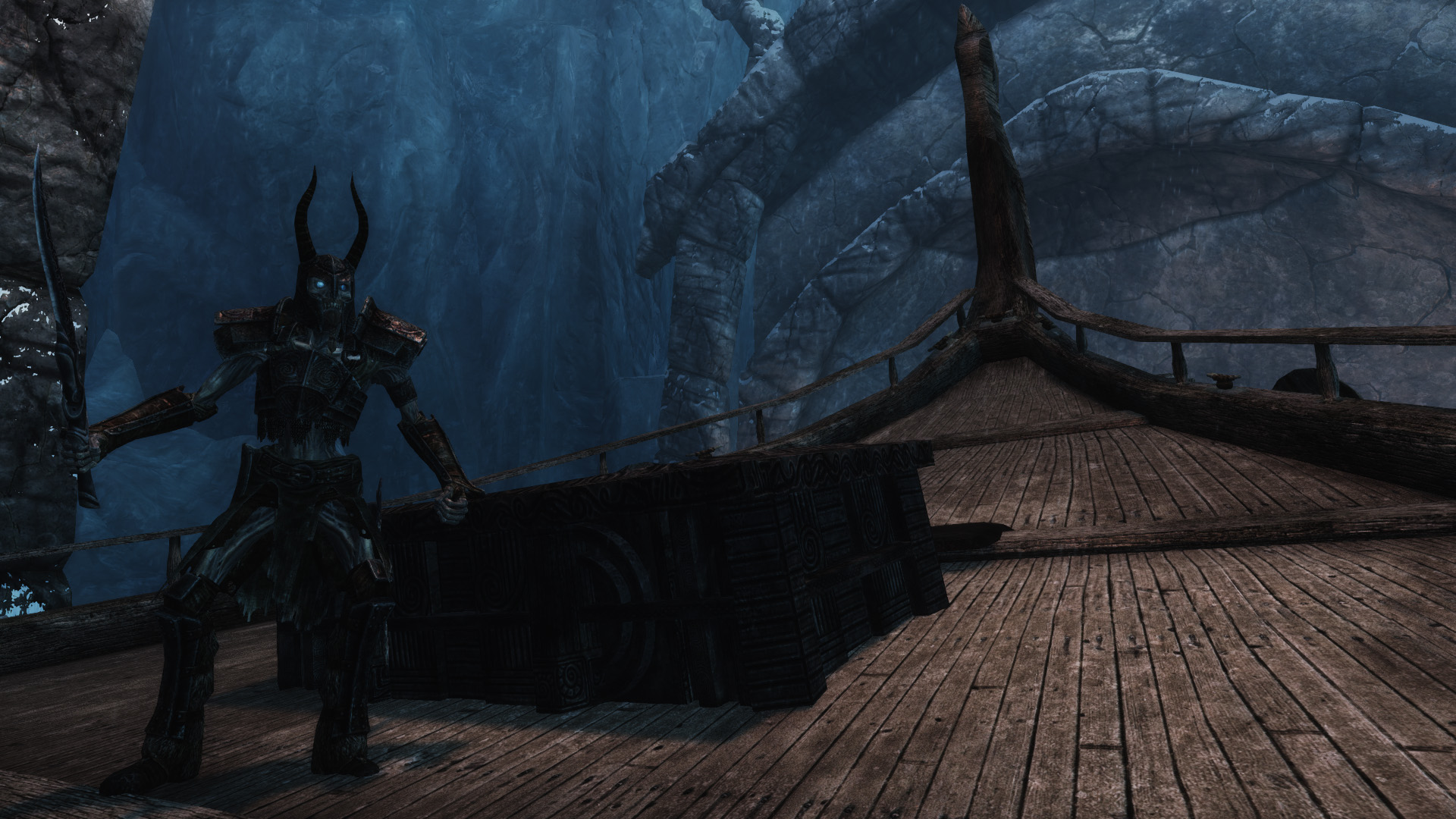 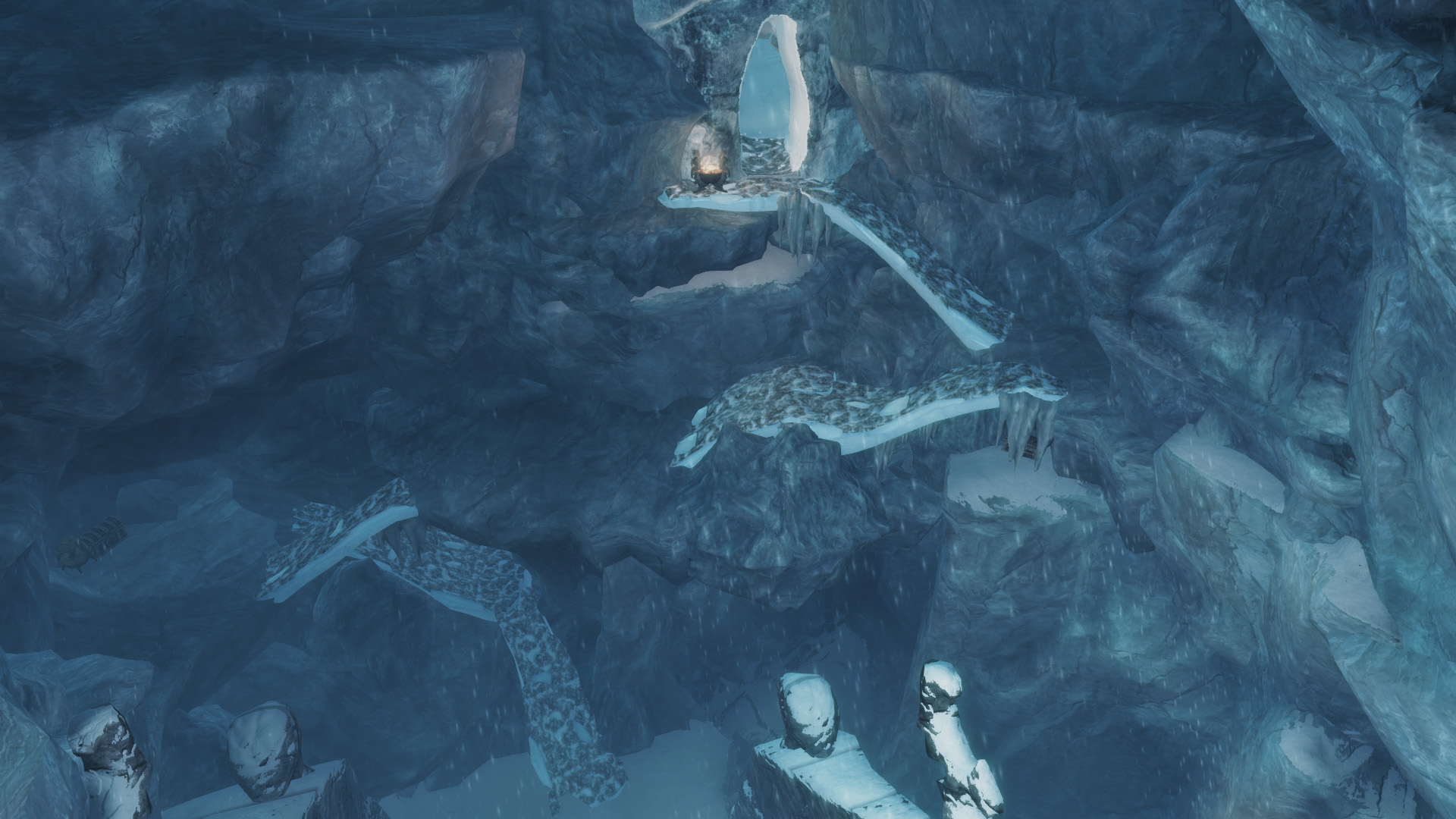 After reaching the boat’s destination, a door leads the player to an area buried deep withing a glacier.  Here the player learns the fate of Vylkinmar and his ship, and must defeat Vylkinmar to complete the quest and the dungeon.

Skyrim doesn’t really use moving platforms, at least not ones that the player can base on.  I scripted a fairly simple waypoint system to move the boat, but accounting for any companions the player might have had in tow made things a bit complicated.  I created an AI package to tell followers to boatd the boat at a certain time, and navmeshed both where the boat started out and where it came to rest so that followers could find their way on and off the boat.  While the boat was in motion, companions didn’t really have to move, and even managed to engage enemies in ranged combat despite the lack of proper navmeshing.. I also had to consider what would happen if players or companions jumped or fell off the boat.  I created a series of trigger volumes to keep players on the boat while it was in motion, and used another trigger to detect if a player or companion did somehow managed to fall off and place them back on.  Also, Skyim’s standard enemy behavior allows enemies to attack players, but only within a certain distance.  I had to create custom packages that told the enemies to fire at players on the boat even though they might be far away.

The third section of dungeon I constructed featured a fairly small, but very tall area.  It needed to be able to fit the crashed ship, and I wanted players to be able to look up and see the sky far above them.  Because of the height and demensions of the room, I had to use non modular glacier pieces instead of the standard tillable ice cave set.  Constructing a fully enclosed area that allowed for easy player navigation without using a tileset was a bit of a challenge, but I think I managed it pretty well.

This project gave me a chance to work purely on level flow and planning and implementing encounters.  It gave me an opportunity to learn a new toolset as well as see how Skyrim handled things like scripting and quest implementation.  At first glance, it’s easy to view the creation kit as a bit clunky and lacking in a few modern features like support for multiple viewports, but once you dive deep into it, you start to notice all of the nuanced features it offers that help speed up content creation.  Things like quest aliases and leveled items can be really powerful tools.  There were a few elements of my level that I wanted to incorporate but had to cut because the toolset wouldn’t support them, but it still proved a very capable tool for level creation.